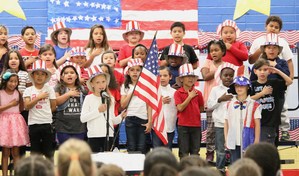 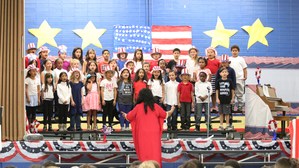 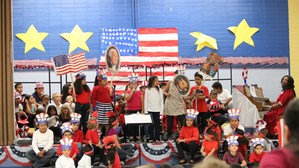 Whittier Elementary School students got into the spirit for the upcoming Memorial Day holiday. First and second grade students presented a spring concert for families with a Patriotic theme to celebrate the United States’ history.

The event began with the audience and students standing for the Pledge of Allegiance. After the Pledge, students asked the audience to remain standing as they sang the Star-Spangled Banner. Students performed a total of 10 patriotic songs, either by singing, with bells, and even Kazoos!

Students began practicing for the concert around January. The students in Primary chorus, which is made up of second grade students, would meet once per week for 30 minutes and classroom teachers began rehearsals after students came back from Spring Break.

Throughout the concert students were all attentive in the role they played. Some students sang, some played instruments, others had speaking parts, and some danced. The joy that exuded from students as they performed was infectious. Audience members could be seen clapping, smiling, and taking pictures throughout the entire performance.

Ms. Ruthie Savon, Music Teacher for Whittier Elementary and Ramona Elementary, created the Spring Concert. She said she wanted to celebrate the fact that students of different cultures and backgrounds were able to come and work together in unity.

Thank you Ms. Savon for creating a wonderful Spring Concert for the parents and students at Whittier Elementary School!